As gray as the world really is, people are seeing it more and more as black and white. Acts are either good or evil. Opinions are either right or wrong. You’re either Team Edward or Team Jacob.

Is that joke too dated? You probably thought either yes or no.

Although there are plenty of issues that arise from viewing the world in these “either or” terms, one issue in particular is that it tends to make people more extreme in their stances. For example, researchers had participants report their opinions on a variety of political topics using one of two types of scales.

In one group, they provided their opinion on scales like this:

For the other group, they provided their opinion on a series of scales like this:

On the surface, these scales may not seem that different, but when you’re forced to align yourself with one side or the other, you’re no longer able to take a more mixed stance. For example, in this study, the participants who responded to the second type of scale later reported being significantly more extreme in their opinions than the other group.

We see this all the time in the real world: you’re either a republican or a democrat; you’re either pro-life or pro-choice. In reality, however, we don’t have to take one side or the other; we can take more moderate or nuanced views on any topic.

Unfortunately, the catastrophe theory of attitudes explains why this isn’t usually the case.

Essentially, this theory says that for unimportant topics (e.g., chocolate vs. vanilla ice cream, Dyson vs. Dirt Devil vacuums) people are more likely to have a spread of views: some people will be a little in favor of one side, some moderately so, and others extremely. 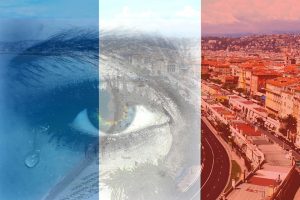 For example, when college students were asked to rate their opinions on topics important to them (e.g., lowering the drinking age), around 90% of them provided the most extreme responses, whether that was in favor or opposition. However, when the topics weren’t that important, less than 40% supplied the most extreme marks.

That is, the mere thought effect states that simply thinking about a topic polarizes your opinion of it—even in the complete absence of external influence.

For example, researchers gave participants either 60 seconds or 180 seconds to think about capital punishment, and afterward, they measured their attitudes toward it. As would be predicted by theory, those who spent more time thinking on it were significantly more extreme in their attitudes.

So keep all of today’s points in mind when considering your own stance on various topics, and remember: moderate attitudes and opinions have never led to the violence and vitriol that extreme ones often do.

Psychophilosophy to Ponder: What are some topics you have a more extreme stance on? Have you ever considered why you were so extreme? Is it that the arguments or so compelling? Is it because the other side is so unequivocally wrong? For fun, try taking a topic you are beyond certain on and try to come up with the most compelling reasons you can for the other side’s stance.