Romance is everything. — Gertrude Stein

A couple days ago, I had my newly minted Highbrow course, Attraction Science, published! Already, the course has rocketed with sign-ups as people apparently really want to know how to be more attractive.

In addition to that 10-day course, though, I also wrote a brief guide on The Psychophilosophy of Dating, where I provide scientific advice on “before the date,” “during the first date,” and “securing the third date.” You can download that guide for free by following the link above!

And because it never hurts to talk a little more romance, let’s use today’s post to discuss one of love’s most fertile grounds:

Although drinking is the common practice at these institutions, often it is done in the service of another goal, namely, romance. So let’s talk how you can improve your odds (or at least learn some of the psychology) of pub love.

First, it’s been shown that men are more attracted to women wearing red. That is, after researchers presented the same woman in red versus another color (white, two shades of gray, blue, and green), men consistently rated the woman in red as more attractive.

Interestingly, this “red effect” 1) only had an effect on men and not women, 2) increased ratings of sexual attraction and the amount of money willing to be spent on a date, but 3) had no effects on other positive traits, like overall likeability, intelligence, or kindness.

Researchers have yet to identify why this effect occur, but some hypothesize that because women’s bodies often turn red/pink when they’re sexually aroused. This color association then triggers an unconscious, evolutionary cue in men that the lady in red is a “prime and suitable mate.”

But regardless of what you’re wearing, you can’t start a romance without an actual introduction. So what should you say to that hottie at the bar to get things going?

Researchers interviewed 200 men and women and asked them to generate between 5 – 10 pickup lines, and from the most popular 100, the researchers used some fancy statistical analyses (i.e., factor analysis) to determine the three “types” of pickup lines: 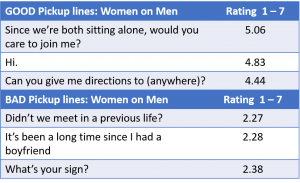 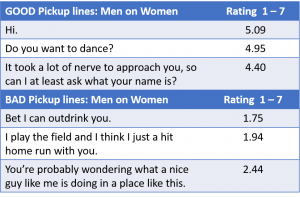 After categorizing them, the researchers then presented the lines to a new sample of 600 participants who rated how effective they would be. And across multiple studies, one consistent finding emerged: the cute-flippant lines were not effective—both for men and women.

However, even if you’re not wearing red and your pickup line involves angels or astronauts, because you’re at a bar, you have one last hope for romance: beer goggles.

Researchers went to a local, campus pub between 9pm and 12am and had men and women first blow into a breathalyzer and then rate the attractiveness of 15 pictures showing potential heterosexual mates.

So, between my Highbrow course, my dating guide, and today’s post, I expect a thank you comment when you find that special other.

Psychophilosophy to Ponder: How much of attraction is really based on conscious decision compared to subconscious influence? Some research shows that consciously thinking about why you like someone actually decreases the likelihood you’ll stay with them. So, does it reduce or heighten the value of love if it comes from unexplainable factors rather than explicitly recognized compatibility?