Democracy is being allowed to vote for the candidate you dislike the least. – Robert Byrne

If you were a good Ohioan, you recently voted in the presidential primaries. If not, you’re probably dealing with cognitive dissonance (use trivialization to resolve it; that’s the easiest). But still, even with this politicking passed, we only have more ahead. 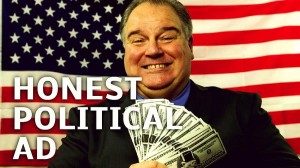 Political ads, lawn signs, satirical cartoons, you will be hounded by marketers to vote for their candidate. However, you dear reader, are an astute voter and believe that you are immune to such political blandishment.

But if you’ve learned anything from these posts, it’s that the world’s grasp on you is lighter than you can feel, and even the subtlest of things can influence your thoughts and behaviors—most of which is beneath your conscious awareness.

Playing happy music in a political commercial to make you like the candidate more. Putting a presidential ad in an economics magazine to give him associative expertise. Or what about using a heavier clipboard for petitions to make the issue seem more important?

In English, Spanish, Dutch, and Chinese, the word “weight” has connotations of importance. A weighty decision. She has to weigh her options. And as we hear these expressions time and time again, we start to pair “weight” with “importance.” So what happens when you’re handed a heavier than usual clipboard?

Researchers from the Netherlands informed participants about a dispute on a college campus, where students were protesting their school’s rules on freedom of expression. Crucially, one group of these participants learned about the topic while holding onto a lighter clipboard, while the other group held a heavier one.

And afterward, those participants with the heavier clipboard wereconvinced that the student’s protest was more important to resolve.

Taking this further, the researchers gave participants information about the mayor of their city—again, while they either held a light or heavy clipboard. And those who held the heavy one, had stronger opinions toward him afterward. 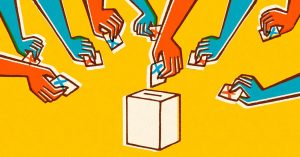 In the final study, to determine why this heavier clipboard was causing these effects, the researchers reran the prior study but examined how much the participants elaborated on it (or, in other words, how much they thought about or considered the message). And those with the heavier clipboard—treating the decision as if it were a “weighty” one—spent more time reading it.

In essence: Simply having a heavier clipboard while you hear about a topic makes you 1) think the topic is more important; 2) encourage you to think more about the message; and 3) result in a stronger opinion toward to the topic after reading it.

And no matter how sharply aware you are of politicians’ wooing tactics, it’s the subtle, imperceptible things that still influence you.

Unless of course, it’s Trump.