There is no sincerer love than the love of food. — George Bernard Shaw

I did a calculation of my finances recently and I made a startling discovery:

It is really easy to spend money.

So in response, as any graduate student would do, I tallied up my purchases, coded them into one of nine categories, and ran a series of statistical analyses on them, providing a revelatory discovery:

It is really easy to spend money.

Particularly, on eating out at restaurants. 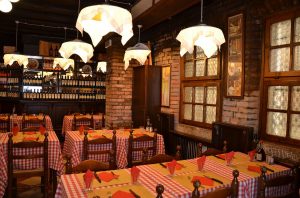 Just last year, people spent about as much money on groceries as they did on dining out. In fact, behind rent and car payments, “food away from home” constitutes the third largest category we spend money on.

Now, this in and of itself isn’t a bad thing (even if your cooking expertise allows you to make sandwich au beurre d’arachide et confiture*). However, one of the main problems with eating out is we usually don’t do so healthily.

And unfortunately, the psychology isn’t stacked in our favor.

For example, one team of researchers went around to various locations of a chain restaurant and examined the variation in ambient lighting between the establishments. That is, some were a little darker while others were a little brighter.

And although we usually associate lighting simply with “the mood,” the researchers also found it affected people’s eating behavior. That is, those who dinned in dimmer versions of the restaurant were more likely to eat unhealthy food! The researchers contend that we’re less mentally alert in darker restaurants and therefore more susceptible to the pull of unhealthy items.

However, even in bright restaurants, you’ll need to remain vigilant when it comes to the menu itself, too.

Crucially, then, between the menus, which would lead to greater indulgence in the unhealthy item? 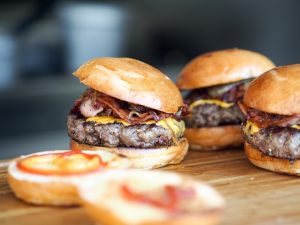 In what the researchers deem ironic self-control, when people were shown a healthy option (i.e., the veggie patty) they were more likely to select the unhealthy option (i.e., bacon cheeseburger). That is, when we’re simply presented with a healthy item, it temporarily fulfills our health-related eating goals and permits us to enjoy ourselves.

So, with all of this working against us when we dine out, what can we do to protect ourselves?

One study showed that ordering your meal for the future (i.e., choosing what you’re going to have for lunch two hours before you actually eat it) reduced caloric intake by about 10%. Part of the reason this works is because without the delicious smells and sights of food (which are usually stronger for the unhealthy foods), the impact of those visceral factors is weakened.

But in the end, if you’re like me and are spending too much on dining out, another option is always to simply dine in.

That just seems so less pleasurable though, when your go-to meal is a peanut butter and jelly sandwich—even if you can write it in French.*

Psychophilosophy to Ponder: In what other ways to subtle changes to a restaurant affect the way you eat at it?  For example, if a restaurant puts their healthy items at the top (vs. bottom) of the menu, do you think it’d have any effect on what you’d choose? Other research has shown that even the name of the restaurant can influence how you dine there.