The Influence of Anchoring

Everyday Psych » The Influence of Anchoring
by Jake

The greatest deception men suffer is from their own opinions. – Leonardo da Vinci

Without any further information, if I asked you whether you would be more likely to buy a more expensive meal at a restaurant called Studio 97 or Studio 18, which would you say?

Clearly, the only difference between these restaurants (as far as you know) is the random number at the end of their names. Now, maybe one of those numbers is your lucky number which makes it easy (though which would also be weird; who likes 97 or 18?). But without knowing anything else about the restaurant, which do you think you’d be willing to spend more money at?

I’ll explain my mysterious intro in a moment.

First, let me tell you about an interesting study done back in the 70’s. Researchers gave participants five seconds to solve one of two math problems. That is, participants either saw: 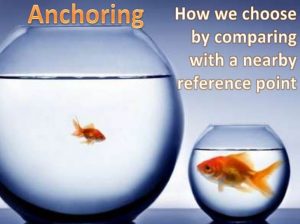 But even more interesting is the discrepancy in response when both problems are exactly the same numbers?

This is what’s known as anchoring.

Using this initial, automatic estimation, our brains then try to come up with a more accurate estimate by “anchoring” (or using the information from our first, intuitive calculation) to come up with a second more probable answer.

Let me give another example that may make this clearer.

Subsequently, researchers asked participants to give them their estimates for Gandhi’s age when he died.

That’s over a 30 year difference simply because the participants “anchored” on that initial question with the absurd age.

Think of when you’re with friends and you’re trying to guess how much something may cost. Have you ever come up with a pretty big number only to hear your friend first say something smaller? All of a sudden you think, “Well, maybe my guess should be a little lower…”

Returning to my initial example, the researchers found that participants were willing to pay a significantly larger amount at the restaurant called Studio 97 (vs. Studio 18). That is, because seeing the bigger number in the title of the restaurant, made people anchor on a larger number for estimating how much they’d spend!