Well, not my whole world, but the part of it I spend the majority of my time in; namely, my bedroom.

Now, I don’t want to say moving to a new apartment was the worst thing I’ve ever experienced (I got this sliver in the third grade that took five days to come out), but it definitely wasn’t pleasurable.

What was pleasurable, though, was using my abundant, graduate school stipend to answer new apartment questions: which new bed sheets to buy, which rug matches my bathroom, how many forks do I really need? 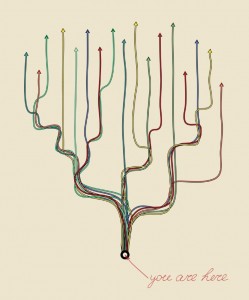 We make simple decisions like these all the time, usually the result of quick, thoughtless decisions. When it comes to bigger choices, though, like which apartment to move to, we realize that it’s better to take our time, rationally considering a list of pros and cons.

But what if I told you the research states exactly the opposite?

Work by Ap Dijksterhuis (I’ll let you struggle with that name), examined this very question by presenting participants with descriptions of four different apartments, each one described with 12 different attributes (meaning a total of 48 pieces of information).

Now one of these apartments was the best (it had 8 positive attributes and 4 negative ones), another was the worst (8 negative and 4 positive), and the other two were split even.

After reading these descriptions, the participants selected which apartment they thought was best in one of three ways: a) they immediately made their decision; b) without looking at the descriptions again, they were given 3 minutes to decide; or c) they did a mathematical distractor task for 3 minutes—not allowing them to think about the apartments—and then chose.

As it turned out, those who had the distractor task were most likely to select the best apartment. In fact, the researchers replicated this finding in two other studies, one of which involved evaluating potential roommates.

But how could this be?

Dijksterhuis contends that when we are given lots of information like this (e.g., selecting a new job, choosing a vacation locale), our conscious brains simply can’t handle all that information. And when we try to, we tend to make errors.

For example, rather than consciously remembering and considering all the positive attributes of an apartment, we might get mentally “caught up” on one negative attribute, which leads us to believe the whole apartment is bad.

Having this distractor period (rather than just the immediate decision) allows our unconscious to process and organize all the information in a way our conscious minds are simply incapable of. And similarly, making a snapshot judgment also fails because our brains haven’t had the time to unconsciously integrate all the information.

For simple choices, though, conscious decision-making can handle the load and does quite well. But as the saying goes, when you have a complex decision ahead: Sleep on it. As I’ll be doing on my brand new sheets!

Dijksterhuis, A. (2004). Think different: the merits of unconscious thought in preference development and decision making. Journal of personality and social psychology, 87(5), 586.