The Fifth, Fireworks and Failure

Everyday Psych » The Fifth, Fireworks and Failure
by Jake

There it was, hidden in alphabetical order. 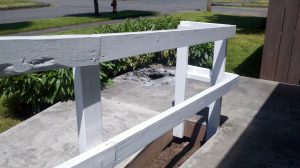 Sometimes you just do stupid things.

For instance, after the Fourth of July celebrations this last Wednesday (one that I had even heralded warnings about in my previous post), I did something stupid. Not something exceptionally stupid like re-enacting scenes from the Matrix on top of a priceless marble coffee table given to your father by his mother before she passed. Just something…kind of stupid.

Do you see that picture in this post? Yeah…That was me for the most part.

Okay, for the whole part.

This is not was I supposed to do.

And as you can see, that gaping black hole leading to a netherworld of parental disappointment and future manual labor on my behalf was the result.

However, I did learn from my stupidity and will now never put the burning aftermath of a volatile combustible on a dry, wooden ramp. But you know, some things you just have to learn by making the mistake in the first place.

Unfortunately, the knowledge I learned from one stupid mistake does not always transfer to preventing other stupid mistakes, i.e. I’m soon driving off for Central Oregon (where I won’t have internet) so I have to write this blog very quickly.

And by quickly I mean in next three minutes, because in the previous eight hours when I could have written it, I was too busy doing nothing.

So I apologize that this post is short, and potentially full of grammatical errors. But the lesson of the story is this: