Prejudice is a great time saver. You can form opinions without having to get the facts. — E.B. White

Last week, we described the introduction of recreationally using marijuana in the United States, through the surge in Mexican immigration in 1910. Already, these immigrants were an outside group (an “outgroup”) to the U.S., and so American citizens regarded them, and any unique attributions to them (i.e., their use of marijuana), negatively. 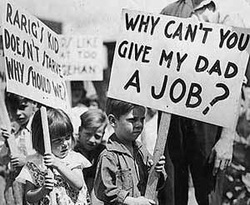 However, this problem only worsened at the end of that decade and into the next with the onset of The Great Depression.

One of the fundamental theories in social psychology is known as “realistic conflict theory,” and it describes the way in which prejudice (i.e., the negative feelings and attitudes we have toward a group of people) originates.

When groups come into competition over a limited number of resources (whether these resources are actually limited or only perceived to be limited), feelings of resentment arise for the other group. For example, if there is only one slice of pizza left, and you and another person both want it, you start to develop negative emotions toward the other person.

From an evolutionary standpoint, this allows us “to do what’s necessary” in order to make sure that we ourselves (or those we associate with ourselves, e.g., family, countrymen, etc.) are able to get what we need.

With The Great Depression, then, as Mexicans continued to immigrate into the U.S., Americans saw them as competitors for the valued resource of employment, and thus, Americans developed even stronger prejudice toward the outsiders. And where there is prejudice, there are stereotypes.

A recent study wanted to show just how powerful prejudice was at influencing our thoughts and behavior, so researchers designed a study in which they could create content-free prejudice. That is, they wanted to make people feel negative toward a group of individuals without really having any reason to feel that way.

To do this, researchers told participants that they were helping with an “attention test,” when really, the researchers were conditioning the participants to either like or dislike a country without knowing why. That is, the researchers paired a fictional country’s name, “Eritrea,” with either positive words and images (e.g., kittens, party) or negative ones (e.g., filth, cigarette butts).

For those in the negative condition,  participants automatically disliked the country even though they didn’t know why. So in response, they generated a host of negative stereotypes about its citizens to justify this prejudice. For example, the people of Eritrea were described as “quick-tempered,” “stubborn,” “lazy,” “dirty.” 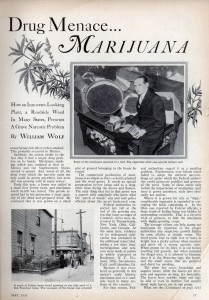 prejudice (those negative feelings/attitudes) demanded justification, and what easier way to do that than through ascribing negative traits to its people?

With the Mexican immigrants during The Great Depression, there was all this negative prejudice toward them over the loss of American jobs. So what did Americans do? They made justifying stereotypes and negative claims about the immigrants, namely, their use of marijuana.

To explain their dislike of Mexicans, citizens began to ascribe any violent crime the immigrants committed to their use of the drug. And because it would be easier/more feasible to ban marijuana than it was to evict all the immigrants, people rapidly mustered support for anti-drug campaigns. And subsequently, the “Marijuana Menace” was born.

However, this is only part of the drug’s demise. For very soon, “scientific” research would empirically conclude, yes, marijuana does turn you into a murderer.