In grocery stores, you often have to swipe a “club card” to get discounts on select items. And although this may seem like an incentive to keep you shopping at their store, really, they just want to know what kind of products their clientele are purchasing—sometimes for understanding general trends, but often, for knowing what you specifically buy.

In fact, a great (and true) story about this comes from Target, who, years ago, started sending personalized ads to its customers depending on what kind of items they frequently purchased.

Well, one day a Midwestern father came marching into the store, demanding to know why his teenage daughter was receiving ads for cribs and baby formula. The manager of course apologized, stressing that the computers, not him, use algorithms based on one’s purchases to determine this.

As it turns out, though, our future electronic overlords were right: the father later learned (and called the manager to apologize) that his daughter was in fact recently pregnant.

Because of our increased online (and thus documented) activity, marketers are becoming evermore accurate at 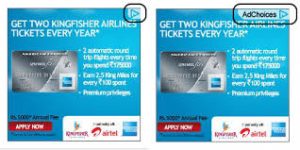 predicting the kinds of consumer products we would be interested in purchasing. And if you’ve ever been browsing the internet and seen an ad with a little blue triangle in the upper right corner, that means the ad was specifically targeted to you.

That is, based not only on your online purchases but the links you click, the YouTube videos you watch, the news articles you read, that AdChoice logo means that advertisement was personally tailored to you.

And once you look for that azure triangle, you’ll start to see it everywhere.

When online behavior started vamping up, marketers pounced upon this megaton of information for advertising. However, understanding that access to such personal information could later result in governmental regulation, advertising agencies banded together to self-police themselves before another organization was assigned to do so.

From which, the AdChoice group was born. But how effective are these tailored ads at getting you to actually purchase something?

According to estimates, only about 2-3% of all tailored ads are actually clicked on (which is still much higher than the <1% of general ads people see). Interestingly, though, when psychologists (who sometimes end up as marketers) study the effectiveness of these personalized ads, they find an interesting divide:

For older generations, these personalized ads are actually less persuasive than general ones. For example, if you’re an avid bicyclist, and you can tell this ad was very specific to you (e.g., it’s recommending a brand you yourself own), the advertisement was less persuasive at getting you to buy a bicycle part than a general ad about bicycling.

On the other hand, for the younger generation who have come to accept that their data will be monitored and mined, 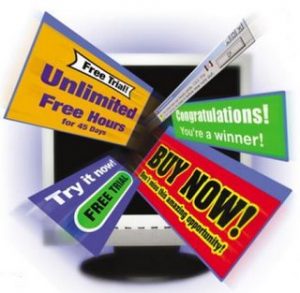 they find the specific ad more persuasive than a general one. Whereas the older generation view these personalized ads as restrictions on their freedom (i.e., freedom of privacy), the younger generation simply see it as how things are (read more about this with “the reactance effect“).

So next time you’re browsing the internet and see one of those ads with the blue triangle, does it seem oddly specific to your interests? If not: what could it be telling you about yourself that you didn’t realize before? (…probably that someone else is using your computer)