A First Step to Weight Loss

Everyday Psych » A First Step to Weight Loss
by Jake

Ironically, weight loss and weight maintenance are two of people’s most commonly held goals, yet nearly one third of all U.S. adults are overweight—a trend that has only been climbing since before the 90’s.

So why is it so difficult? What are the psychological factors preventing us from living healthier, fitter lives? Unfortunately, large scale problems like these don’t have simple solutions. But un-unfortunately, I do have a simple first step that you can adopt for yourself or spread to others in trying to attain your desired weight goals.

WHERE’S THE WEIGHT COME FROM?

There are a lot of factors that contribute to people’s physical weight: their genetics, their social context, the food they eat, the exercise they engage in, and more. In which case, it can often be difficult to determine what exactly contributes to one’s weight gain struggles.

But research does suggest there is one factor that accounts for more than the rest:

To cite an editorial from the Journal of the American Medical Association:

“Environmental causes for obesity are far more influential than genes… [and although] exercise is associated with weight loss, its duration or intensity has minor effects on weight loss relative to diet” (Livingston & Zylke, 2012; p., 971-2)

In fact, if you compare today’s obesity rates with those in 1980, today’s rates–globally–are more than double! Yet, there hasn’t been enough time for genetic mutations to account for the obesity gains. And exercising rates have either increased or remained stagnant. So, what has changed, though?

Well for one, people eat approximately 200 more calories a day now than they did back then.

IT BEGINS WITH THE BELIEF 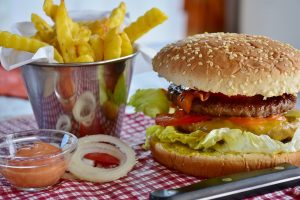 When researchers measure people’s beliefs about the origins of weight gain, they find an interesting pattern: people either tend to believe obesity is predominantly caused by a bad diet or a lack of exercise. In fact, when participants were asked to freely list “the primary factor responsible for people being overweight,” 85% of over 250 people indicated diet or exercise.

But even more interestingly, those who listed exercise as the primary cause (vs. diet or both combined), tended to be the most overweight themselves (see the graph).

Indeed, the researchers found this effect over and over again. In the U.S., France, South Korea, Hong Kong, the more people believed that weight gain was predominantly affected by exercise (vs. diet), the more unhealthy their weight tended to be.

To explain why this would be occurring, researchers brought participants into the lab and had them read a “scientific article” claiming that either diet or exercise was more influential on weight gain. Afterward, the researchers had participants complete some unrelated tasks, but importantly, they left the participants with a few chocolates to snack on.

YOU ARE WHAT BELIEFS YOU EAT

Now, just because diet is a meaningful factor in one’s weight maintenance goals, that doesn’t mean you should be consumed by thoughts of calories. In fact, if you find yourself obsessing about what and when you eat, I recommend you check out this site here.

Nonetheless, understanding the factors that influence our goal attainment—and some of the psychology that stands in the way—is an important part of living a healthier, happier life. So, what other goals could you use a little psychological insight on? I want to make this site and its information as valuable to you as it can be!

Psych•o•philosophy to Ponder: One of the primary reasons that people tend to believe that diet and/or exercise are the main causes of obesity is because people tend to believe that weight gain is within a person’s control. And because of this, there can be a lot of stigma surrounding obesity (i.e., because people think these are “controllable” aspects of one’s life, they blame the overweight person for being overweight). However, once a person gets into a certain lifestyle, it can take more than a simple “change in one’s belief” to correct the issue. To that effect, try being compassionate toward others to help them keep to their consumption goals (or getting a friend to help you with your own). And as another tip, try using the psychological power of if-then statements as I’ve described previously on this site.