Unfortunately, such motivation results in one of the most profound psychological biases: 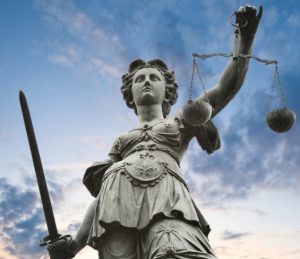 We are motivated to believe in this cause-and-effect order, a sort of “contract” with the world whereby playing by the rules ensures we’re able to achieve our hopes and goals. If we didn’t believe this, we’d have to accept the fact that we live in an unpredictable and chaotic world–a fact no one would want to sit with.

And true, this bias can be useful to motivate us to do good deeds and keep us from doing bad ones; but also, it can result in some powerful misperceptions…

For example, one of the first studies documenting this bias had participants come into the lab and watch a confederate (i.e., a researcher who’s pretending to be a participant) get shocked for no reason.

We see this same pattern prolifically in real life, too. For example, we justify the suffering of the homeless by claiming they

deserved that outcome, e.g., they were lazy; they got addicted to drugs; etc. When a woman is raped, we blame her for dressing promiscuously or going where she shouldn’t have.

In fact, even when someone has spent years in jail after being wrongly convicted of a crime, what’s one of the first thoughts that comes to mind? He probably did something else to deserve it, or he wouldn’t have been a suspect in the first place.

We have such a powerful motivation to believe in this order that we will even apply it to ourselves when we were wronged for no due reason. For if we don’t believe in a just world, it means that the same, undue suffering that happens to others, could also randomly befall us. And such unpredictability, such lack of control, is terrifying.

Fortunately, we are not chained to this bias, and taking a moment to pause, to admit that sometimes bad things do happen to good people, we can refrain from making the attributions that prevent us from helping and sympathizing with those who truly deserve it.