Everyday Psych » Only So Much
by Jake

Yesterday I was clever and tried to change the world. Today I am wise and try to change myself. – Rumi

If I were to join a religion, I would be a disciple of Time. Both a stalwart monk and a proselytizing minister, a believer and a preacher of those twelve numbers and their ever-circulating blades.

I carry a phone in my pocket; I wear a watch on my wrist; I glance at wall clocks, schedule meetings to the minute, set an alarm every day.

And like most deities, this god cannot be seen. It is all around us but never truly understood. It encourages us to spend our days wisely, to live in the moment, to give thanks to it, for without it, we wouldn’t be able to give thanks at all.

And so today, in reverence of this divinity, I provide you with extra time in your day by giving you both a riddle and a parable in one. (Do note, although I didn’t originate this riddle, I wrote it in my own words):

There was once a powerful and wealthy sultan, so powerful that men needn’t know his title to heed his dictate, so wealthy that any gift received was no more than custom. Recently, however, his cherished advisor passed away, and the sultan knew he would need another’s counsel.

So upon his gold and ivory throne one day, he offered the position—the second voice of the kingdom—to any man who could accomplish a specific, impossible task:

Bring him a magical ring that when looked upon made a sad man happy and a happy man sad.

Knowing full well that such an item did not exist, the sultan was only interested in the cleverness these attempts would bring. And within days, entertainment was provided.

Rich merchants who brought rings straight from sorcerers. Exotic travelers who presented rings chipped from holy stones. But upon examining each trinket, the sultan would only smile, thank the man for his attempt, and send him on his way. 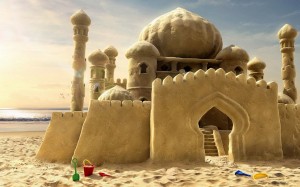 One day, however, a poor man dressed in his finest but still tattered clothes came limping into the throne room. The guards were hesitant to let him approach, but the sultan shooed them away.

Bowing, the poor man introduced himself as a farmer with a ring given to him by his late wife. At the mention of her, however, his face curled in sorrow until he looked down at the ring, whereupon a thoughtful smile displaced his melancholy.

The wealthy sultan, intrigued to see the ring already fulfill half of its spell, beckoned the man forward. Receiving it from the poor man, the sultan examined the tarnished gold ring and found a simple engraving inside of it. Instantly, sorrow befell him.

Can you deduce what was written on the inside of the ring?

If not, here’s the answer: the engraving read, “This day, too, shall pass.”