A hallucination is a fact, not an error; what is erroneous is a judgment based upon it. — Bertrand Russell

Alongside 30% of the population, sometimes I struggle with insomnia. Like last night, for example, I couldn’t locate the Sandman till well past 5:00AM, neither my thoughts nor my heart rate able to slow to slumbering speeds. 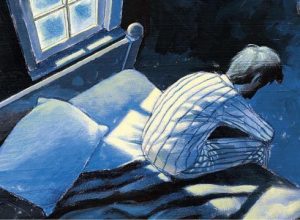 One useful sleep technique that received some national attention (though only anecdotally substantiated) is known as the “4-7-8 exercise” and—drawing my own inferences here—works through something close to the psychology of embodiment.

According to the 4-7-8, its sleep advice is in its name: you inhale for four seconds, hold your breath for seven, and then exhale for eight. Repeating this process, you mind becomes focused on your breath and timing, naturally relaxing the rest of your body in suit. Your brain then infers from your body’s tranquility, “Oh, it must be time for sleep,” and boom, you’re down for the count.

However, for those who suffer from chronic insomnia, a select percentage of them have far greater concerns than an inability to sleep. They must deal with some truly nightmarish experiences.

Recently, I finished a book called Hallucinations by Oliver Sacks, an excellent work of science writing that details a variety of ways in which hallucinations emerge in the human psyche. In regards to sleep, first, there is a common one many people report having experienced: hypnagogic hallucinations.

This twist to our reality tends to come at the precipice of sleep, where as we balance that ledge between semi-consciousness and unconsciousness, our minds create visual perceptions that seem much realer and more vivid than voluntary images.

For example, Sacks writes,” [whereas voluntary images are] assembled slowly, bit by bit, like a painting…hypnagogic hallucinations appear spontaneously, unbidden and full-blown” (p. 202). To be clear, these hallucinations are neither dream nor waking fantasy. However, neither are they projected into one’s external reality; though, the images are still very vivid and often bizarre. 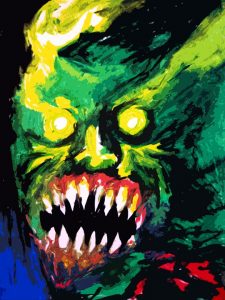 However, whereas these visual (and also auditory) nighttime hallucinations are mostly benign (e.g., seeing text on the wall, hearing a sentence uttered), for those who experience hypnopompic hallucinations (i.e., hallucinations that occur going the opposite direction—sleep to waking) take on an altogether different form.

“I wake from a calm sleep and perhaps a fairly normal dream with a shock, for there before me is a creature that even Hollywood couldn’t create” (p. 210). The hallucinations don’t last more than 10 seconds, but while they’re alive, they seem like actual monsters.

Some examples of the hallucinations one patient has had includes: a rotting corpse lying next to him, a huge crocodile at his throat, a heavy hand over his face, masses of logs falling on top of him, and very frequently, giant spiders crawling everywhere.

Although there is nothing pleasant about waking every morning to some of your most visceral fears playing out before you, some people have used the images for creative inspiration. However, others have have taken a less fictional account of the hallucinations, and instead use them to support their beliefs in the supernatural.

Whatever the result, I don’t think there will be much hallucinating, or rather, dreaming for me tonight as I make up for my missing sleep.

Psychophilosophy to Ponder: What did the quote of the week mean to you? Are hallucinations “facts” to the people who experience them? If so, how come we can’t draw conclusions from this fact like we can others?