…the powerful play goes on and you may contribute a verse. What will your verse be? – John Keating, The Dead Poet’s Society

The world isn’t always as fair and as beautiful as we’d like it to be. There are lumps. There’s deformity. But for most, we can overlook or at least bear that unevenness, tolerate the bad by attending to the good. For some, though, that asymmetry in the world, that warped unsightliness can simply be too much.

And just as the light can be too dull to banish enough shadows, so can it be too bright to reveal that crookedness the shade otherwise rounded out.

Two days ago, a comedic legend and hero of my childhood, Robin Williams, passed away. For me, he is one of the first celebrity deaths that really knocked around my ribcage. Mrs. Doubtfire. Patch Adams. John Keating. The Genie. It was his voice, his characters that made me laugh and recite quotes and want to be an entertainer.

To hear of his death, then, and the manner in which it came, struck me. 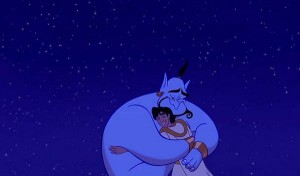 Although social psychology doesn’t study depression in the same way clinical psychologists do, there is insight within the field that’s applicable.

For instance, one of the more common sources of depression comes from a low sense of self-esteem. And although there are a few theories that attempt to explain self-esteem, the one with the most support is called Sociometer Theory.

From an evolutionary perspective, the development of self-esteem was integral to our survival. Because we were much more successful at living in groups than alone, we needed a way to evaluate whether or not other people wanted us in the group. Thus, self-esteem exists to alert us (often with feelings of emotional pain) in order to motivate us to correct or minimize our chances at rejection from social groups.

When people are depressed, then, one of the main causes is their belief in their own devalued social contribution. Of course, there are many other factors that determine depression, but self-esteem is often foremost.

Sadly, with self-esteem, though, it is an entirely internal belief. No matter how others may judge your accomplishments, it is you who determines your self-esteem. And if you believe that others don’t find you worthy, no amount of factual convincing can persuade you.

Although I only knew of Mr. Williams from his movies and interviews, he seemed like a truly wonderful individual. And from the outpouring of love around the world, it seems in fact my perception is accurate.

However, once one’s light falls on the malformed knots of this world, sometimes that’s all they can see. So let us take a moment to thank him for nonetheless directing his light for us on the contours worth seeing.