With Christmas just tomorrow, I decided to give you, dear reader, a present. That is, today’s bit of psychophilosophy comes to you in the form of a holiday poem. Enjoy!

‘Twas the night before Christmas, when all through the house,
Not a creature was stirring, not even a mouse.
Well, not a mouse with a tail and downy, white fur, 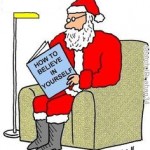 For a mouse with two buttons and wheel was a blur.
As usual, Jake wrote his blog at last minute—
Coming up with a topic and then trying to spin it.
So let’s begin with the basics and talk simple persuasion:
Why do stores play Christmas music? It’s not for elation.
You see, Christmas music for most has good memories,
And these cheery thoughts recharge our happiness batteries.
Being happy, in turn, makes spending money less averse;
So when we hear “Frosty the Snowman,” we reach deep in the purse.
Now, just because Christmas makes our view on cash shift,
It doesn’t mean you should ever give cash as a gift.
The research here shows this present’s not beneficial;
It conveys that the relationship is rather superficial.
Furthermore, giving money implies a power contrast.
That is, by giving cash, you’re saying you’re the higher class.
However, this stipulation aside, give and give freely—
The studies all show that giving’s better than receiving.
For example, researchers polled 632 for their income
And found happiness depended on who it was spent on.
Rather than wealth, joy was correlated with where it went;
That is, those who used their money on others, were the most content.
But as any good researcher knows, we need better confirmation.
For as I’ll have carved on my tomb: correlation’s not causation.
So in this same study, the researchers went back to the lab,
Got a bunch of participants and had the following plan:
The people were given either $5 or $20 of real wealth;
Then they were either told to use it on others or themselves.
After eight hours, the scientists called the participants back in
And had them fill out some surveys to measure their happiness.
Regardless of amount, the researchers found
Using that $5 or $20 on others had effects profound.
People were significantly happier when not using it for themselves:
The real wealth in money coming from its use on someone else.
So this Christmas season, be happier by giving gifts.
Just remember: who’s the one always giving free psychophilosophy tips?