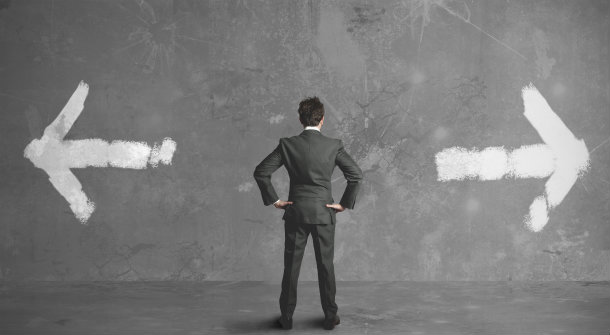 We are our choices. – Jean-Paul Sartre

I once had a professor in undergrad begin a new class by saying, “So you know, I’m rather opinionated. But I make up for it by always being right.”

Although my dad has never explicitly said such a thing, I’m sure he would find it rather agreeable.

In general, though, we all believe that we’re right in how we think. And in a way, we have to. If we didn’t believe we were right in doing what we were doing, we wouldn’t be doing it. For every action we take has to be the action we believe—at least in that moment—to be right.

Let’s take my last Friday night for example. Out at the bar with friends, there came a point in the night where I and the final swallow of my

current beer were having a stare down. Rationally, I knew that if I ordered another, my Saturday would be one of dragging feet, squinty eyes, and lots and lots of Netflix.

Furthermore, I knew that I was already pleasantly merry and another beer really wouldn’t improve my situation. But can you guess what I decided?

Let’s just say I still wonder why they accepted me into graduate school.

Even though in the moment I recognized the negatives of such a decision—and in hindsight, I felt them—I still decided to order another beer. Why? Because I thought it was my best course of action at the time.

Take another example: a teen who is being pressured into smoking her first cigarette. Even though she knows it’s bad for her in every way, if she decides to smoke, she is determining that that smoking is the better action than not smoking (maybe she believes not disappointing her friends is more valuable than the costs of smoking).

No matter the topic, no matter the action, everything we choose to do (or choose not to do) is logically, necessarily what we believe to be the best to do.

Now let me make clear: just because someone thinks an action is a better in the moment, it doesn’t mean you have to feel that way when looking back on it. In fact, often they’re contrary (just as Saturday-Jake thought Friday-Jake was an idiot).

But go ahead, I challenge you to think up any situation where in the moment, your decision wasn’t what you thought was best to do at the time. For even if you think you wouldn’t enjoy doing something (but you did it anyway), you must have believed that doing that unenjoyable task was better than not doing it.

Although today’s post was a rather philosophical one, it is a principle that underlies everything psychology tries to do: understand why you believed that decision was the best one. What thoughts, what contexts drove you to think this course of action was the best one.

And if you study persuasion like me, how we can convince you to think our course of action is that one.