The Psychology of Laughter

Everyday Psych » The Psychology of Laughter
by Jake

Laughter is like a windshield wiper, it doesn’t stop the rain but allows us to keep going. – Gérard Jugnot

Being done with my candidacy exam, having Thursday and Friday of school cancelled, watching a video of a cat with its head stuck in a plastic cup, I can’t help laughing.

And it feels good. Laughing always feels so good. 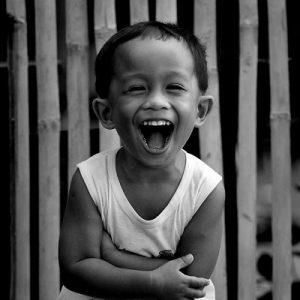 Just recently, in fact, I had a long Skype call with someone I had met while traveling, and she made me laugh as if I had just then discovered this bizarre, feel-good noise. In fact, my roommate even commented he could hear me through the walls (was she that funny? am I that loud? …probably both).

However, as much as people love to laugh and as important as it is to our daily wellbeing, it really hasn’t been studied that much. Generally, scientists agree that it’s good for you, but what laughter is and why it’s beneficial are still mysteries to researchers.

Still, I do have some insight on this laughing matter:

1) Although we typically think the person listening is going to be the one to laugh, the truth is that the speaker tends to laugh about 50% more than his or her audience (I guess we do think we’re funnier than we are).

2) When it comes to laughter, the more humorous the better, right? Actually, only around 15% of all person-to-person laughter results from anything “joke-like.” In fact, more benign statements (e.g., “How are you?” “Did you just see that?”) result in more laughter.

3) Most of the time, laughter is contagious and hard to control consciously. For example, one researcher gave participants a box that generated canned laughter (the background laughter from 90’s sitcoms). And even though the participants knew this laughter was intentionally there to make them laugh, they couldn’t help it: they joined in on the hilarity, even when trying to resist.

4) Laughter is sexy—at least if it’s a man making a woman laugh. Research by Grammar and Eibl-Eibesfeldt paired heterosexual men and women in the lab and had them engage in spontaneous conversation. As it turned out, the more the woman laughed, the more she later reported interest in the man.

5) Although the direct medical benefits of laughter are still debated, there does seem to be some evidence that laughing allows us to endure greater discomfort. Participants who had previously watched standup comedy (vs. an entertaining 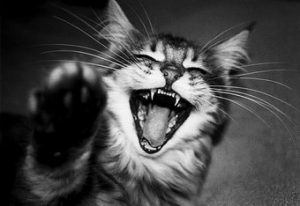 narrative) were longer able to endure a painful clamp on their arm.

So although I don’t have a unifying theory about laughter (though it does seem to have a primary function in social bonding), at least you have some interesting facts to share when you realize you have nothing funny to say.

As for me, last week someone commented on a “young woman I’ve become fond of.” And well, if I can make her laugh as much as she made me laugh on Skype, then maybe I’ll have more to report the next time you hear from me.

Provine, R. R. (1992). Contagious laughter: Laughter is a sufficient stimulus for laughs and smiles. Bulletin of the Psychonomic Society, 30(1), 1-4.