Nothing makes us so lonely as our secrets. – Paul Tournier

I have a secret.

A dark and shifting, wormy secret…

All right, maybe I hyped that up a little bit. But I do have a secret—one that I’ve been carrying around for the last two years. That is, until I recently learned that it’s far less a secret than I thought.

Regardless, secrets are an interesting topic for a number of different reasons, such as why do we feel so compelled to share them? (I’m actually doing research related to this now.) Or how do we feel when we learn others know our secrets? (Not great, I can tell you.) Or relevant to today’s post:

What does keeping a secret do to you personally?

Previously, I’ve talked about the concept of embodied metaphors in previous posts; however, secrets are different enough that I think you’ll find this interesting. (If not, keep it to yourself.) 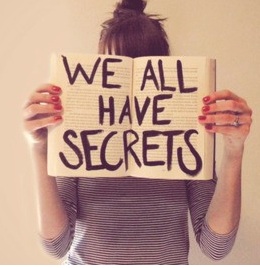 In one study, for example, after participants recalled their secret (either the meaningful or the small one), researchers showed the participants pictures of a hill they were supposedly going to have to walk up later and asked them to estimated how steep it was.

Interestingly, those who had recalled the big secret rated the hill as significantly steeper…

Another study had participants recall one of the two types of secrets and then play a beanbag toss game. That is, a target was placed on the ground about 9 feet away and participants were told to throw the beanbag as close to the mark as possible.

Here, those who had recalled the big secret consistently overthrew the beanbag compared to the small secret group…

In the final two studies, researchers looked at two specific populations of people: romantic partners who had been unfaithful and homosexual individuals. Here, the researchers found that the adulterers who thought a lot about their infidelity and the homosexual individuals who were told to “hide” their sexual orientation both rated a variety of objects as much heavier than their matched, comparison group.

So can you figure out what keeping secrets do to us?

Just as we say we “feel” burdened by secrets, it seems that they do in fact burden us. That is, at least concerning cognitive perception, keeping a secret makes us feel heavier such that the effort to walk up a hill, the distance between us and the beanbag target, and the weight of objects all seem greater.

Now, as for my own secret…I think having my whole department know what it is should be enough to alleviate that added burden from my chest.

Though now your desire to know what it is might have added a burden to yourself.