The Eyes in the Back of Your Head

Vision is the art of seeing what is invisible to others. — Jonathan Swift 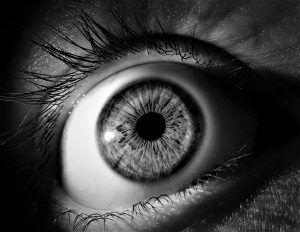 I don’t know the exact point in humans’ evolutionary history where a genetic mutation gave moms an extra set of eyes in the back of their heads, but it’s a given fact that they have them.

Like the childhood instance when I tried to eat an earthworm, and my mom—engrossed in yard work—spun with saucer-sized eyes and a clump of weeds she was prepared to throw at me if I continued with my culinary exploration. I stopped, dumbfounded, that with her back completely turned, she knew.

And although that back-head pair of eyes is often chalked up to folklore, recent research suggests those stories may not be far from the truth.

But first, let’s talk about how some people can see without actually seeing… 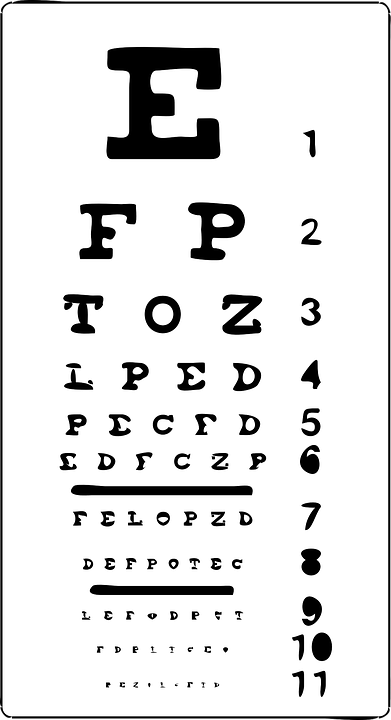 When I took my first university psychology class, Dr. Numan told me about an astounding phenomenon:

Researchers would take explicitly blind individuals—people with no conscious ability to see—and throw a ball at them. Although this sounds like a cruel prank, the researchers had discovered that these patients would actually catch the ball.

When the patients were asked later how they knew/were able to catch something they couldn’t see, the patients had no explanation. They had no idea a ball was thrown until it ended up in their hands.

Blindsight refers to individuals who have damage to their primary visual cortex, preventing them from consciously being able to see anything.

However, because of other structures in the brain, such as the superior colliculus (a less “evolved” area related to vision) and the lateral geniculate nucleus (an area that processes the position and movement of objects), these otherwise blind individuals are able “to see” certain things. Or rather, their brains are able to.

Which, can we take a moment to acknowledge, is pretty darn remarkable…

But what about the spots that people with regular vision are “blind” to? You know, behind the head?

As I began this post, it’s common for us to attribute eyes to the back of people’s (mothers’) heads. And even though we don’t really have eyeballs back there, the brain does simulate some for us.

Researchers had participants come into the lab where they were surrounded with six LCD screens (see right). Participants then had to perform a visual search task, where a bunch of letters would appear on all the screens, and the participant would have to identify a specific one.

What the participants didn’t know, though, was that some of the letter patterns repeated. That is, although participants had no conscious awareness that these patterns of letters (also shown right) were repeating, the brain somehow remembered.

Consequently, the researchers found that even though participants thought each trial of the visual search task was unique, they were nonetheless able to more quickly identify where the specific letter was “hiding,” even when that letter was out of sight behind them.

In a sense, then, the brain creates a non-conscious, 360° representation of the space around you. So even though the conscious mind doesn’t explicitly access it, the brain’s mental map can still influence our behaviors (just like with blindsight). 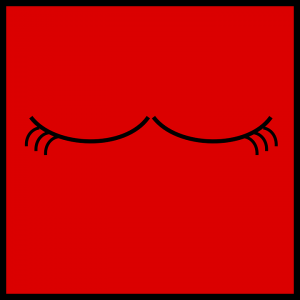 Together, this research highlights a number of points. First, moms (like all of us) do have these “simulated eyes” for the environment behind them. (And maybe, though it’s not been tested, these mental maps are more accessible for moms, especially when a child is around.) Second, there are factors outside our conscious awareness that influence our thoughts and behaviors. And third, you should check out the Psychophilosophy to Ponder section for a fun optical illusion that highlights your own seeing without seeing 😉

Not so blindly,
jdt

Psychophilosophy to Ponder: In order for information in our eyes to get passed to the part of the brain that processes vision, the sensory information gets communicated through what’s called the “optic nerve.” However, in order for the optic nerve to transmit that information, it has to run a line of cells out the back of the eye–meaning there are no photoreceptors (i.e., cells that can detect light) at the point of the optic nerve’s exit. Following so far? This means that where the optic nerve leaves the eyeball, there are no photoreceptors allowing us to see. So even though you can’t detect it, there’s a tiny blind spot in your vision all the time. But because the brain is SO incredible, it uses the information from all the surrounding photoreceptors to “smooth out” that tiny blind spot so you never see it. Well, you never see it until the demonstration below. (This example was taken from a textbook but can be found here: https://www.slideshare.net/bpiper74/introductory-psychology-sensation-perception-vision) 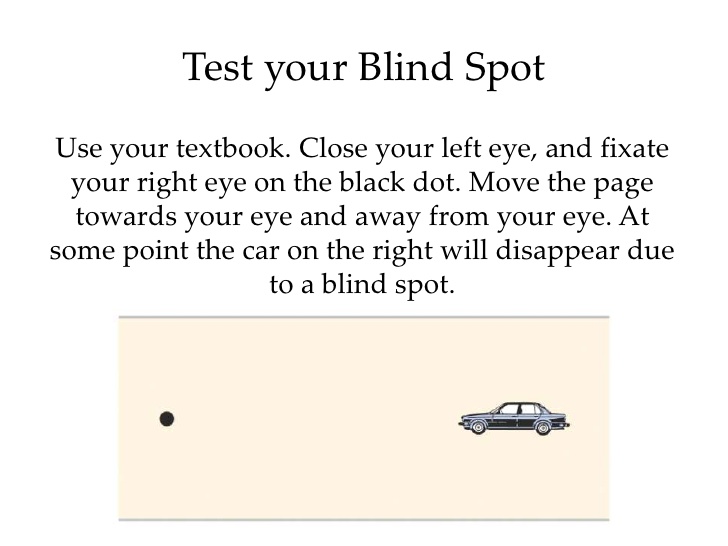