Boy, would I like a new cell phone. Something faster, something shinier, something that doesn’t do the current “which-app-did-you-not-touch-but-I’m-going-to-open-anyway” shuffle.

Now, I could purchase the newest, currently released version of my phone, or I could wait for an updated and even jazzier one later this fall. Both options, monetarily, would cost me about the same, but the latter would be a better investment.

But do I really have the self-control to wait till autumn?

With a little gratitude, I might be able to.

In some of the more deceptive research I’ve read, participants were brought into the lab two at a time under the pretenses of doing a “lexical decision task;” that is, repetitiously and tediously looking at strings and strings of letters and determining if they were nonsense or English words.

And by now, the first deception has already happened: There was only one real participant; the other was an experimenter in disguise (i.e., a confederate).

Now, although the confederate “finished” the experiment without problem, right as the real participant was about to complete it, there came deception number two: his/her computer appeared like it crashed.

Who knew an academic study could have so much drama?? 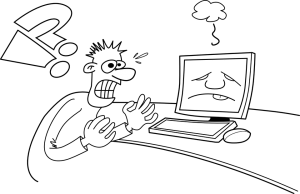 But wait—for once the experimenter leaves, the fourth and final deception came with a little kindness: The confederate, troubleshooting the issue herself, surreptitiously hit a button on the keyboard before pretending to wriggle a cord that fixed the computer.

Glory be! Glory be!

Relieved to be finished with most of the experiment, the actual participant completed a few more questionnaires (which included measures of gratitude) before being excused from the study.

Now, here’s where the effect occurs: Three weeks later, the participants were brought back into the lab under the pretenses of a completely unrelated study on self-control. Here, those same participants answered 30 questions similar to “If you had the choice between $10 today or $15 a week from today, which would you choose?”

Technically, the better choice would be the $15 in a week; however, because we crave to have things immediately, it requires self-control to exert that patience. (Just imagine the choice for yourself, which does your gut pull you toward?)

From a series of these self-control tests, the researchers found that those who demonstrated more gratitude three weeks prior—in a totally unrelated task!—exhibited significantly more self-control in this task. Thus, this research documents how people’s gratefulness toward occurrences in general predicts their ability at self-control in general.

Although this study is correlational (though a causal study did establish this psychological link, too), it demonstrates the broader point that the more grateful people are in their daily lives, the better they are at self-control—probably because they’re grateful for what they have already.

So when it comes to whether or not I should get a new phone? Well, I suppose I should just be grateful my phone has yet to randomly start playing the theme song to Game of Thrones in a meeting with my adviser (just kidding, it did that).

Psychophilosophy to Ponder: At what point does gratefulness become too much for its recipient? That is, surely you’ve encountered someone who thanks you too profusely. What is it that made their appreciation overdone?