Racism is man’s greatest threat to man–the maximum of hatred for the minimum of reason. — Abraham Heschel

I am outraged by the explicit racism that transpired this weekend in Charlottesville, Virginia, and I am livid at hearing others defend it.

For a proper response to the violence and bigotry, here’s Marco Rubio:

“The organizers of events which inspired and led to the Charlottesville Terrorist Attack are 100% to blame…When [an] entire movement [is] built on anger and hatred towards people different than you, it justifies and ultimately leads to violence against them…The White Supremacy groups will see being assigned only 50% of [the] blame as a win.”

However, as easy as it is to condemn Nazis and other hate groups (for which, my current state, Ohio, has over 30), it can be much harder to condemn the bigotry that exists within ourselves. So hard, in fact, that even scientists—the arbiters of truth—are villains of it.

THE SCIENTISTS OF EUGENICS

Eugenics is the act of trying to “improve” the human population by controlled breeding—which in and of itself implies that there are better and worse kinds of people. Infamously, eugenics is associated with the Nazis, who in the 1930s used it to justify the racial policies being implemented in Nazi Germany. 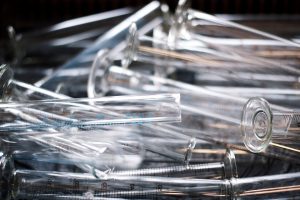 But to date, there is no valid or systematic empirical evidence that supports the idea that some people (i.e., some races) are better than others. Instead, we have only what’s known as “scientific racism,” i.e., manipulating, twisting, or outright fabricating data to make it appear as though some races are superior to others.

And although I love the field of psychology, this science is not without blood on its hands…

Many of my field’s most used statistical techniques come from individuals who originally developed them to try to prove their racist beliefs. For example, I’ve talked about correlations many times on this site, and yet, its inventor, Karl Pearson, believed that his nation should be developed from “better stock” and the only way to do so was “chiefly by way of war with inferior races.”

In fact, one of my favorite posts on this site is based on the original work of Francis Galton, the man who invented the term eugenics in the first place.

IT’S NOT JUST THE PAST

In 1994 (hardly 20 years ago), “researchers” published a book called The Bell Curve: Intelligence and Class Structure in American Life. In it, they argue that class differences relate to IQ differences—which they assert are distinguishable by race. That is, they spend nearly 900 pages trying to prove that Black people are less intelligent than White people.

And this book became a “New York Times Bestseller…”

But within a year of the book’s release, when experts in the field were able to examine the “data” presented, they discovered countless mistakes, from one-sided reasoning, to incorrect (and cherry-picked) citations, to blatant mathematical errors.

Of course, all of these “mistakes” supported the authors’ thesis.

Then, in 2007, an economic historian wrote a book that argued “Caucasian superiority” was due to the wealthy English outbreeding the poor, which allowed their superior genes and values to flourish. Then, in 2014, a science journalist wrote a book that supposedly examined genetic sequencing between races to again show that Blacks were inferior to Whites.

But for both of these books, critics have repeatedly pointed out how they ignore the influences of geography, how they cite research that has been discredited, and how they assert claims as fact, when at best, they are the mere speculation of racially motivated men.

And the people writing these things are supposed to be the most introspective, empirical-minded individuals in our society. Yet they, too, are blinded by their need to feel superior to others.

WHERE TO GO NOW?

To cite a social psychologist on the above points:

“There were brilliant scientists who nonetheless believed in their own superiority as a function of ancestral and national origins, which they correlated with skull shape, skin color, biological sex, and so on. These beliefs are grossly stupid, obviously self-serving (all were white men), and provably false.” 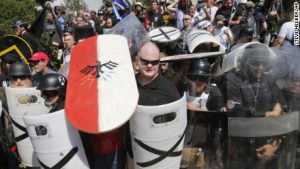 It is not enough today to simply condemn the overt racism that gets national attention, like the Charlottesville terrorist attack. Racism is like cancer. You can’t just eliminate the big splotches and think you’re cured. You have to eliminate every corrupt cell where you find it to prevent it from duplicating and spreading and killing (literally) those we should be calling brother and sister.

So don’t just spend your Facebook hours making outraged posts, take the time to educate yourself, to read more on the topic, to take a moment and seriously try to perspective take: If you saw a group of men armed with riot shields, clubs, and guns all there to promote their ideology that you, your family, and your friends should be eradicated simply because of your skin color, how would you have felt? What would you have thought?

Sadly,
jdt
**today’s post was inspired by Geoff Durso whose quote was cited above

Psychophilosophy to Ponder: If you want to learn more about how racism got to where it is today, I’d highly recommend watching Thirteenth (available on Netflix) or The House I Live In. If you’re looking for a good book on the topic, I’d also recommend Ghettoside. Or, if you just want a brief summary of some of these topics, I have a previous post on the subject here.