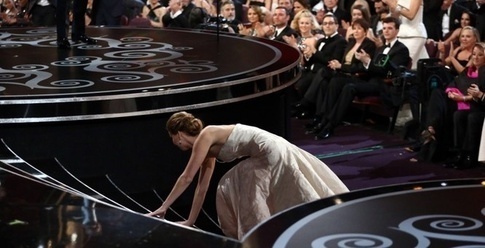 As much as my mother may advocate and believe it, I am very far from perfect. In fact, as is the case with everyone on this planet, I should be described as remarkably imperfect.

Sometimes I forget to keep promises. Sometimes I unintentionally keep secrets from people. Sometimes I write things on my blog that I expect no one but my family members to read. However, just because we’re blunder-prone creatures, it doesn’t mean that such character flaws are actually detrimental.

That is, there is a bit of research showing that having these blemishes can actually make us more attractive to others.

Wait, what? How could an imperfection lead to someone liking us more?

Well, let me describe for you the “pratfall effect.”

Originally documented in 1966, researchers brought participants into the lab and played a tape for them in which a researcher interviewed one of four, ostensibly real people.

In one condition, students learned about an impressive peer: he was very smart, active in the community, and a skilled athlete. For the less impressive peer, he was described with average intelligence and moderate involvement in other activities.

That is, when we believe someone is amazing, they almost seem “too good to be true.” Their blunder (or pratfall), however, makes them more relatable and therefore more approachable and likeable.

Throughout our days, we constantly compare ourselves to others, but comparing ourselves to someone we believe is better than us, often lowers our self-esteem or incites envy. However, when this “superior” individual makes a blunder, it helps to lower our evaluation of them and make them seem more similar to us.

Interestingly, for those very high in self-esteem, seeing a pratfall in someone else doesn’t have the same effect. That is, the high self-esteem observer already believes him or herself to be “perfect” in a sense, so seeing this other impressive individual make a blunder actually reduces their perceived attractiveness (because now this person is less similar to the “perfect” observer).

However, narcissists like that are a whole other topic for a discussion another day. For now, just let it be known that I have plenty of pratfalls in case you thought otherwise. But heck, if you’ve read even a single one of my blogs, you would be well aware of my penchant for stupidity.