Our understanding is correlative to our perception. – Robert Delaunay

This last week, I went from the sub-zero temperatures in Columbus, OH to shirtless strolling on the sands of Long Beach, CA for a social psychology conference.

Oh, how glorious that golden sun doth be!

But speaking of glorious, golden things we all hope to have above our heads, today’s post is about the halo effect.

One of first studies conducted on this effect was done in 1977, where researchers showed students a film clip of a Belgian professor teaching a class. Now, for half of the participants, the professor was warm and friendly in his presentation; for the other half, he was cold and distant.

As expected, the researchers found that students preferred the warm professor to the cold one; however, they also discovered some peculiarities… 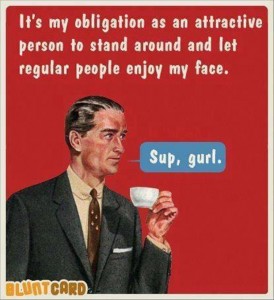 Not only did the students dislike the cold professor more, but they also found his accent harder to understand, his mannerisms more irritating, and his physical attractiveness significantly lower.

Keep in mind here: These students didn’t expect to take a class with the man. There was no motivated bias to perceive him less positively (researchers even asked participants about this).

The halo effect, then, is when, as a function of just one trait (e.g. his coldness), we perceive negativity in people’s other traits, too.

In maybe an even greater display of the halo effect (though researchers at the time weren’t calling it that), participants were given one of three photos: a photo of an attractive woman, an average woman, or an unattractive woman.

Told they were helping with a “person perception” study, it was the participants’ jobs to try to determine the characteristics of the individuals based on the image alone. After the participants rated the women on a host of different qualities, the researchers found some almost frightening results…

The attractive woman in the photo, compared to both the other two, was rated significantly more self-assertive, exciting, stable, sincere, modest, strong, sophisticated, altruistic—the list goes on and on.

Furthermore, the attractive woman was rated to have greater marital and parental happiness, more social and professional happiness, deeper personal fulfillment! All, simply, because of her physical attractiveness.

Essentially, the halo effect operates off of two principles: 1) you generate positive feelings toward one aspect of a person—with attractiveness, that’s very easy to perceive and establish right away; and then, 2) you attribute those positive feelings to other unknown, ambiguous, or neutral traits about the person.

Often times you hear about attractive criminals receiving less jail time than unattractive ones. Right there, the halo effect is at work. Crime scenes are often ambiguous. The motivation behind the act is often unclear. If the criminal’s attractive, though, clearly he couldn’t have been as bad as the prosecutor’s making him out to be…

No wonder my brother gets away with everything.